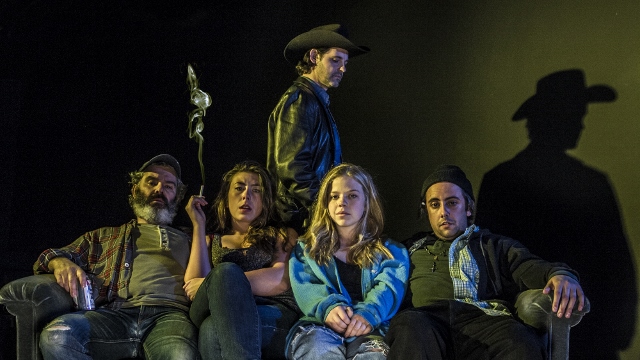 When presented with people who live in a vacuum, the prudent thing is to determine just how far their limited worldviews extend. In the case of the characters in Tracy Letts’ 1993 debut, Killer Joe — adapted for the screen in 2011 and starring Matthew Mcconaughey — the answer is not very far. But that’s exactly the point. Though technically a dark comedy, this production of Killer Joe shares more with a documentary as the Smiths are dead ringers for Donald Trump supporters. Coal Mine’s Artistic Curator, Ted Dykstra, said it himself minutes after curtain call on opening night, “If you were wondering who’s going to be voting for him, now you know.” The audience laughed. He said he wished it wasn’t that funny.

In our defense, most of the play’s jokes manage to be hilarious and incite laughter as a defense mechanism or release valve against human suffering. When Chris says of his mother, “I hate that bitch,” and Ansel responds with a child’s earnest selfishness, “You’re talking about my ex-wife. I’m the one who found her, ” the infantilization is just as funny as the need to laugh off how they’re talking about murdering someone. When Ansel and Dottie enter a vegetative stage at the sight of a television with the instantaneity of a two-year-old, it smothers us with our own screen dependencies like shit in a dog’s face. This is In Yer Face theatre, after all, where too-close-for-comfort is the preferred method of ingestion. Set inside the Smith family trailer, the audience is seated so close that the front row’s feet rest on the living room carpet. Jagged lines in the dirt under the dining room table suggest a recent scuffle. The bathroom patrons use (before showtime only!) is the same one the Smiths call their own. Without the distance of a news sound bite’s brevity, intrusion is something to get used to. The payoff, you’ll find, is worth it.

Killer Joe takes the radical humanist stance of affixing a domestic, sociological lens onto North American politics by getting to know the people threatening to make it great again. The characters’ egoism can feel like five plays simultaneously unfolding. Misogyny is doled out with the poise of inherited wisdom. Genuine care is a rarity; glimpses of it surfacing are perverse in their renewal of faith in people only to tear it down moments later. Amidst the gunshots and blood splatter, a simple “You alright, guy?” or affording someone the privilege of changing clothes never carried such incredible weight.

The characters’ generally hammed-up interaction, paired with the gruesome subject matter, makes them neither wholly realistic nor paper-thin assemblages from sitcoms, christianity and conservative politics, but an uncanny mix of both. They project theatrical versions of the happy-murder-song gimmick of Guns N’ Roses’ “Used to Love Her,” which might see them dismissed as stereotypes, stock realist takes on Married with Children without the softening veneer of make-believe. But stereotypes are exactly what they’re supposed to be. Plenty of Trump rally footage confirms the resemblance. Smart production choices help focus the discrimination and dysfunction as indicative of a voice seldom heard. Cutting the sound on Joe and Dottie as she slips into a black dress doesn’t belittle sexual abuse, it displays it for us in horrifying phenomenological suspension, it gives room to get past our moral filters into a place of empathy. Killer Joe may have passed judgement on the Smiths in 1993, made fun of their backwards ideology in the interest of preventing it. Not anymore, though. Irony has long overstayed its welcome as weapon of choice.

Endicott-Douglas plays Dottie as a vessel, a medium who doesn’t know what she’s transmitting or who it’s for. It’s hard to tell whether she’s conscious or sleepwalking, innocent or underestimated, and we’re left with nothing but textures to read her. The result is a hallucinating angel. There’s this blissed-out, clown-smile trance she falls into at the dinner table, roughly two-thirds through, that might be your new visual cue for evil. Gouveia brings the slime in buckets and never relents; yet he gets across by meaning well. Chris’ passionate, misguided drive toward self-improvement over mere money is endearing, a light with faint traces of purity. He salvages our hope in people by guarding his love for Dottie and comes off noble for it, a commendable mark to hit for someone who wants to kill to finance his deadbeat lifestyle.

Edison is graceful and understated in keeping Killer Joe as small of a person as he can muster. His deadpan charm grows suspicious, robotic, into a way of overcompensating for a history we’re left to imagine.

Paul Fauteux’s comic timing is sharp as a switchblade. How he empties Ansel’s conscience to the lowest possible level of sentience while killing every punchline  is almost computer generated. How he caresses that Budweiser and remote control exposes displaced love like a hockey player tweeting an injury. The warp speed with which his selfishness stops being cartoony draws the audience in by inertia.

Madison Walsh just is Sharla. The script asks a great deal of her and all she does is flex. Years from now, this production should be remembered as a period piece, unabashedly of its time, all up in the chaos of history being written.

Killer Joe runs through April 24 at The Coal Mine Theatre (1454 Danforth Avenue). Get your tickets here. Trevor Abes is a poet and arts writer living in Toronto, Canada. He was part of the winning ensemble at the 2015 SLAMtario Spoken Word Festival, and competed at both the National Poetry Slam and the Canadian Festival of Spoken Word as part of the Toronto Poetry Slam team. His work has appeared in Hart House Review, The Rusty Toque, Torontoist and untethered, among others. You can follow him on Twitter @TrevorAbes.