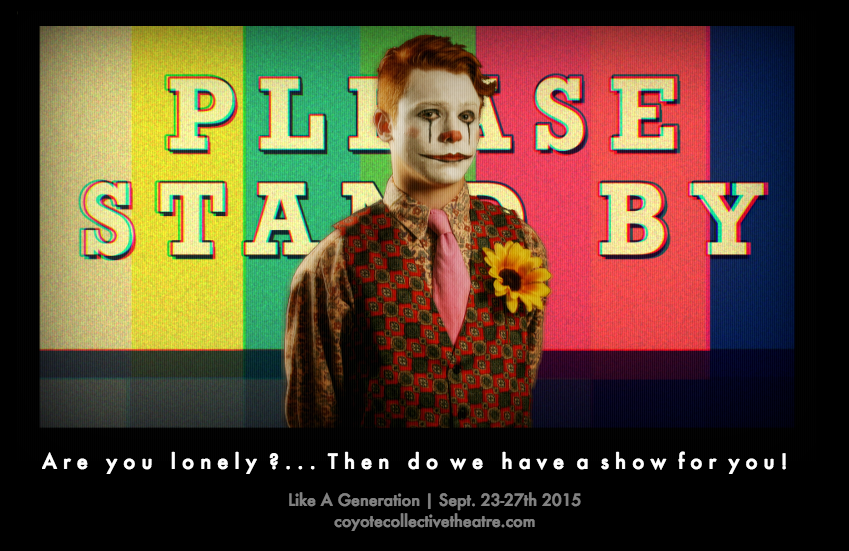 The terrifying thing about watching a lot of TV is that most of the damage it causes is both delivered and received with a smile. Understanding this smile is the central concern in Like a Generation, the latest play from Toronto’s Coyote Collective.

It chronicles the relationship between Anna (Susannah Mackay), Calvin (Eric Welch), and Mr. Flowers (Stephen Joffe), the host of one of their favorite TV shows.

Set against sharp, monolithic screens over a nostalgia factory of a score, they explore the frustrations and delights of fighting for three-dimensional existence in a mediated world where two’s the norm. Mr. Flowers acts as Anna and Calvin’s motivational guru, preaching the idea that your real life experiences should be pursued as if they were stories on TV, as if you knew the ends of the plots before they happened to you. He does this in blind faith, convinced of his good deed like a 17th-century doctor giving a bloodletting.

Anna and Calvin are in a state I suspect more of us are in than we’d like to admit. They know real life doesn’t unfold simple and tidy like it does on TV, but they want it to, unconsciously expect it to and are devastated when it doesn’t. They give form to the vicious circle of believing TV is a valid source for building one’s identity. It promises you uniqueness — it’s just you and your TV after all — but this applies to anyone watching, making us all carbon copies who feel happy because we’ve seen it work so well on screen, but we’re really just pretending and we end up boring one another for lack of novelty. This makes for lonely people. Like a Generation excels at documenting how television manipulates Anna and Calvin to think living well and being entertaining are synonymous concepts. They are then paralyzed by a fear of boredom that renders them emotionally immature, which they can only rid themselves of by allowing their loneliness to become unbearable.

When they brush their lives against each other, they remind us that human connection is a more sustainable proof that you’re alive than how many shows you’ve binge watched; that it gets more mileage out of aging, weakness and defeat in the way of self-realization than their abridged Hollywood counterparts; that it’s way better at helping us be fine with who we are.

The show boasts virtuosic writing by Max Tepper, a stellar cast, and a set that compliments its meta, madcap style with a corporate starkness. It’s as hilarious as it is poignant.

What are you waiting for?

Trevor Abes is a poet, arts writer and member of the Toronto Poetry Slam Team. Find his interviews and essays in Sequential, Torontoist and The Toronto Review of Books. Find his poetry in (parenthetical), The Toronto Quarterly and untethered. Say hello at trevorabes.com.